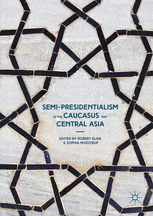 The presidential election was held in Armenia at the weekend. Unsurprisingly, President Sargsyan was easily re-elected. Here are the figures:

The OSCE’s statement of preliminary findings, which is available here, stated that the election “was generally well-administered and was characterized by a respect for fundamental freedoms.” However, there was “a lack of impartiality of the public administration, misuse of administrative resources, and cases of pressure on voters …”.

Armenia held parliamentary elections in early May. The ruling Republican Party of Armenia (HHK) won a majority. However, the previous coalition split, with the Prosperous Armenia (BHK) party deciding not to join the new government.

The new parliament has now convened and ArmeniaNow is reporting that the government’s 5-year programme has been adopted. The interesting element of the report is that the programme was adopted by 75 votes to 47. The votes in favour came from the HHK and its small coalition partner, the Orinats Yerkir (Rule of Law) party. The other parties voted against. So, even though the government has a large majority, there is a ‘real’ opposition.

The website of the Armenian National Assembly records the number of deputies for each group. They are:

So, it seems that the BHK’s move to an opposition party has had a real impact on the dynamics of the system.

The presidential election will be held next year.

Parliamentary elections were held in Armenia on Sunday. The results confirm the dominance of the ruling parties, particularly the president’s party, the Republican Party (HHK). Here are the results from Wikipedia:

There are basically similar results here from Armenia Now.

The discussion now is whether the HHK needs to form a coalition. Prior to the election, it was in coalition with the Prosperous Armenia Party (BHK). However, the HHK now has an absolute majority.

The presidential election is scheduled for next year and, presumably, the HHK does not want to force the BHK into opposition and go alone into the election. Therefore, a coalition may still be possible.

The OSCE is reported to have noted irregularities in a significant number of polling stations. The Electoral Commission has claimed that the election was held freely and fairly.

A quick post today. RFE/RL has a really informative post about the current state of the party system in Armenia, particularly the increasingly tense relations between the three-party ruling coalition. There’s little point in me repeating it. So, the link to the page is here.

Azatutyun.am is reporting that President Sarkisian’s ruling Republican Party of Armenia (HHK) has lost an election.

It was a local mayoral election for the town of Ijevan in the north of the country. The HHK incumbent was defeated by the candidate from the Prosperous Armenia Party (BHK), which is part of the ruling coalition.

This is interesting news because the HHK rarely loses any sort of election and national elections are scheduled for 2012. Armenia is not an Electoral Democracy, but it does have a multi-party system and there is a degree of electoral competition.

In Armenia, RFE/RL is reporting that President Serzh Sarkisian has effectively sewn up the outcome of next year’s presidential election already.

The incumbent government is a coalition of President Sarkisian’s Republican Party of Armenia (HHK) and the Orinats Yerkir and Prosperous Armenia (BHK) parties. In February, these parties agreed that they will support President Sarkisian in next year’s presidential election. However, this decision has the effect of eliminating any effective challenge. In response to the pre-electoral coalition, the opposition Zharangutyun (Heritage) party has boycotted parliament.

Meanwhile, RFE/RL also reports that the government has signalled that it is willing to enter into dialogue with the Armenian National Congress (HAK), which is led by the former president, Levon Ter-Petrosian. The HAK has been behind various demonstrations in the country against President Sarkisian. There have been deaths in the course of the protests. The HAK wants early presidential and legislative elections as well as the release of its supporters from prison.

The parliamentary election was held in Nagorno-Karabakh on 24 May. This region is officially part of Azerbaijan, but it has a substantial Armenian population and declared independence after the collapse of the Soviet Union. The enclave is not recognised internationally, but has a high degree of independence from Azerbaijan. In a previous post, I outlined the semi-presidential elements of the 2006 constitution. In Armenian, Nagorno-Karabakh is known as Artsakh.

In the July 2007 presidential election, Bako Sahakyan, an independent, won over 85% of the vote. In last week’s parliamentary election, Wikipedia is reporting the following results:

This result marks a shift of votes and seats to the “Free Motherland” Party, though the Prime Minister, Arayik Harutyunyan, is from this party already. Wikipedia reports that he was elected to this position in September 2007 with the support of all 32 deputies.

I am pressed for time today, so I am just going to post a link to an article published by RFE/RL on Armenia. It is a really interesting, informative article about the problems with the governing coalition there.

Armenia is one of those ‘problem’ democracies. There is a very strong president and elections seem to favour the main HHK party. However, the government is a real coalition and there is an active opposition.

This article seems to suggest that the ruling regime may be about to fracture. Presumably, how the president and the HHK party respond to the situation will be the true test of whether or not Armenia can really be considered a democracy.

According to Armenia Now the decision was made just prior to the HHK’s conference at the end of November. In another report, it is noted that in “in 1994 Sargsyan was a member of the National Democratic Union (NDU) party board, however, after assuming the chairman’s position of the Central Bank of Armenia in 1998 he dropped his NDU membership and had no other party affiliation”. No official reason was given for the decision to join the HHK.

Finally, it might also be noted that the mayor of Yerevan, Gagik Beglarian, also officially joined the HHK in November. My understanding is that both he and PM Sargsyan were elected to the HHK’s executive at the November conference.